When it comes to sharing information through a public forum such as Facebook, there are so many factors that play into what we can’t control online. On a more global level we are discovering that our “private” information is not so private anymore. Edward Snowden, a former contractor of the U.S. National Security Agency (NSA) and a former employee of the Central Intelligence Agency (CIA) leaked top-secret details of U.S. and British government. His leaks have been the subject of great controversy. Some people consider him a hero and whistleblower, while others describe him as a traitor. Similarly, Julian Assange, the editor-in-chief and founder of WikiLeaks, said this about social-media, “Facebook, Google, and Yahoo are allowing the CIA to access user data via a specially designed interface. Facebook is the most appalling spying machine that has ever been invented.” Through their actions and statements, these two individuals brought global awareness of just how easily outside sources can gain access to our private information. 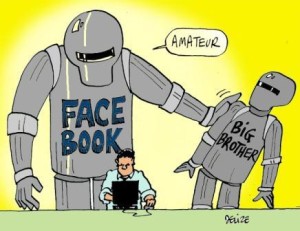 Your Facebook profile may be filled with photos of your children, your thoughts about your in-laws, your plans to overthrow the government and perhaps even a whole lot of evidence on the chapters of your life that you would, say, prefer to be “unpublished.” It can be searched by your partner, stalked by your ex and probed by marketers, future colleges and employers. Facebook’s new search tools even allow strangers to follow your next move. Your photos get tagged and people know where you are because of location check-ins. Nothing is sacred as long as you post it and our sense of control over what we post is an illusion. Think about the last time you posted something on Facebook, Instagram or Twitter and deleted it later the same day just to realize that your post was already forwarded to those you hoped wouldn’t see it. Perhaps you tried to alter your privacy settings. If you’re like me, you probably went through what seemed like 27 steps to make sure what you post would only be seen by your Facebook friends. Then a few months later you realized that Facebook decided to change their privacy settings—again.

In a lot of ways, Facebook itself controls your privacy. This lack of control often leads to unfamiliar anxiety. Facebook maintains it is up to every user to decide how much others see and this is true, to some extent. You can tweak who has access to certain photos, but you cannot stop your friends from sharing them and talking about them behind your back. You may be able to limit who can see certain posts but you cannot stop someone from taking a photograph of your Facebook timeline and sharing it on their mobile devices. Additionally, with Facebook’s new search features, there’s simply no way that you can completely prohibit who can see what anymore. Everything you post nowadays is even easier to find. Realistically, the most that you can do is to limit your photos, edit what you share and decide just how much you really want to share on a public social-media site.

All of this is not to say that I’m suggesting that we get off Facebook for lack of privacy. What I am suggesting is that perhaps we need to take a closer look at what we believe is private on social-media and realize that we have less control over our privacy than we formerly thought.